skip to main | skip to sidebar

THE MOCKINGBIRD, THE CATS & THE AGAVE 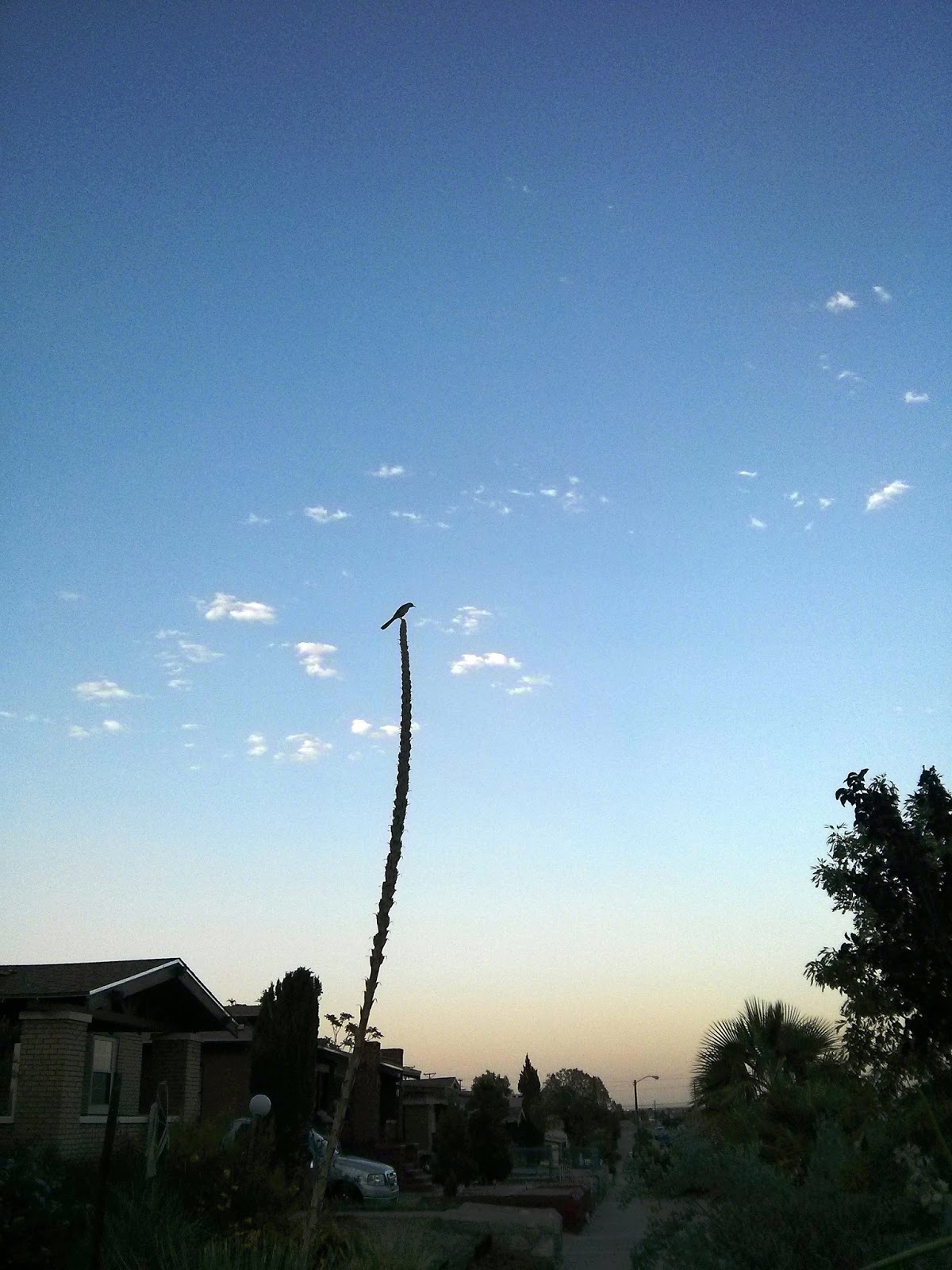 On June 1, I came back to El Paso after three weeks in New York City. Driving up to the house, I saw that the agave plant by the front steps had sprouted, its woody stalk reaching up 20 feet into the blue sky. My gosh, how miraculous, I thought. When I left, there was no stalk at all, and now this enormous growth sprung up from the heart of the plant! Fifteen years ago at least I planted that agave. It’s one of my favorite plants. And, yes, I understand it will die. Agave plants die after they have bloomed. Still, I enjoy that luxurious and unexpected sprouting of the desert. So do the bees. They cluster around the little flowers that the stalk carries toward the blue sky. Truly, living in the desert, we get to enjoy such miracles.

But mockingbirds don’t believe in miracles. They do enjoy sitting atop the stalk high above the yard and screaming at the cats. Cats don’t believe in miracles either. Black cat Ernie and Clovis, the younger grey tabby cat, are asleep, one on the lawn, the other on a shady cool place on the sidewalk. Like they’re not paying any attention. It’s just pretense. They are hunting mockingbirds. Specifically, they are hunting the bird atop the agave stalk. Just waiting for the dive-bombing to begin. Sooner or later, the mockingbird will dart down from the top of the stalk and swoop over one or the other, squawking the whole time. The cat will wave its tail like he’s bored with the bird. That pisses the mockingbird off. She comes screaming down on another run. The cat wags his tail again and raises his head slightly. He yawns.

Every summer the same thing, the parable of the mockingbird and the cat. It’s their game. Sure, maybe the mockingbird is worried about its nest, but I don’t think so. It’s June, all the eggs have hatched, and the little mockingbirds are going about their lives as adolescents. No, I think it’s simply what mockingbirds and cats do. It’s wired into the genetics of who they are. Usually during the summer, one or two mockingbirds will lose the game.

Like this morning, I had to scoop up a dead mockingbird in a plastic bag and tossed it in the garbage. Ernie or Clovis—I don’t know which—had been successful in his hunt. He had killed the bird and eaten off its head, scooped out some organs from the belly, but left the rest of the body alone. It made me sad. I said a little prayer for the mockingbird and for the cats. Everything, Pat Enkyo O’Hara says, must be included in what we see and understand. Nothing must be left out. Not the mockingbirds, not the cats, not the bees, not the agave, not ourselves. When I drove off to work, another mockingbird was sitting atop the agave stalk squawking at the cats. Ernie was lying in the grass, and Clovis was stretched out on the sidewalk in the shade of the desert willow.