skip to main | skip to sidebar

If you live along the border, especially here in El Paso a few minutes from Juarez, you are always hearing terrible stories about the Juarez police and Mexican army abuse of civilians, seemingly with a free reign to do what they want. This impunity extends into the Mexican judicial system where the Mexican judges at all levels act so many times without any regard to the facts. It's more about money and power and fear, the old mordida system--a system that's lost its core integrity. The movie Presumed Guilty by Roberto Hernandez and Geoffrey Smith document one such case. But what makes the movie so much important to me is that I've met and talked with Kevin Huckabee, the father of Shoun Huckabee, who has been incarcerated in the infamous Cereso Prison in Juarez now for over a year. He never got a fair trial and there's good reason to believe that the evidence that put him in jail was planted by the Mexican army. Shoun and his friend Carlos Quijas had witnesses to support their claim, but one witness was killed, the father of another was killed, and all other witnesses have disappeared. Who is to blame them? So Shoun and Carlos languish in prison, learning the hard truths of life in a prison where everything is bought and paid for. Kevin, who is in poor health, goes over as much as he can, he helps pay for bribes to keep his son safe, he negotiates with the Mexican prison system, he enlists the aide of Amnesty International and lawyers and activists--anybody who can help. Infuriating in all this madness is the U.S. government's total lack of help. Our U.S. Representative, Silvestre Reyes, totally ignores Kevin's pleas for help, saying he trusts the Mexican legal system, saying his hands are tied, saying it is not his problem. Meanwhile, the U.S. government will send Bill Richardson around the globe to extricate American citizens from similar situations, it refuses to pressure the Mexican government for release of its citizens five minutes from its border.

Below is the introduction and a link to the Wall Street Journal article by Nicholas Casey that documents the terrible dilemma that Shoun Huckabee and Carlos Quijas find themselves in. The El Paso Times has totally ignored the issue. And below that is a description of the movie Presumed Guilty. The movie is essential to anybody wanting to more fully understand the distress of the citizens of Mexico. It's available free for streaming on PBS POV. Please send the link along, especially to those able to raise a voice in support of a true justice system in Mexico.


July 17, 2010 from the Wall Street Journal by Nicolas Casey.
CIUDAD JUÁREZ, Mexico—Two Americans were driving back to El Paso, Texas, last December after an afternoon across the border in Ciudad Juárez. A few blocks from the border, they were surrounded by Mexican army trucks and pulled from their Dodge Ram.

Violence escalates in the drug wars in Mexico as a car bomb set off by a cell phone kills at least three people. Deborah Lutterbeck reports. Video Courtesy of Reuters.

Mexico's military says it found two suitcases full of marijuana in the cab of the pickup truck. Two soldiers later testified that they drove the two Americans to a military compound on the outskirts of town, questioned them briefly, then turned them over to civilian authorities. The Americans were charged with possession of marijuana with intent to sell.

Those two men—Shohn Huckabee, 23 years old, and Carlos Quijas, 36—are being held in a Ciudad Juárez jail. They tell a different story about what happened that night. They say Mexican soldiers planted the marijuana in their truck. When they arrived at the military base, they say, they were blindfolded, tied up, hit with rifle butts, shocked with electricity and threatened with death.

In December 2005 Toño Zuniga was picked up off the street in Mexico City, Mexico, and sentenced to 20 years for murder based on the testimony of a single, shaky eyewitness. PRESUMED GUILTY tells the heart-wrenching story of a man who happened to be in the wrong place at the wrong time.

A friend of Toño’s contacted two young lawyers, Roberto Hernández and Layda Negrete, who gained prominence in Mexico when they helped bring about the release of another innocent man from prison. As Centro de Investigación y Docencia Económicas (CIDE) legal researchers, they tracked an alarming history of corruption in the Mexican justice system (93% of inmates never see an arrest warrant, and 93% of defendants never see a judge).

Looking into Toño’s case, Roberto and Layda managed to get a retrial–on camera—and enlisted the help of filmmaker Geoffrey Smith (THE ENGLISH SURGEON) to chronicle the saga. Shot over three years with unprecedented access to the Mexican courts and prisons, this dramatic story is a searing indictment of a justice system that presumes guilt.
Posted by Bobby Byrd at 12:38 PM 3 comments:

What is the key
To untie the knot of your mind’s suffering?

And who can ruin
Our heart’s and eye’s exquisite tender
Landscape?

Hafiz has found
Two emerald words that
Restored
Me

That I now cling to as I would sacred
Tresses of my Beloved’s
Hair:

What is the key
To untie the knot of the mind’s suffering?

~ Hafiz ~
(The Gift – versions of Hafiz by Daniel Ladinsky)
For those brave souls who Act Great
that others may live....
●
I stole this from a great website--PANHALA--I only found this week through a newsletter I receive. I've been astonished, reading about the news in Japan, the men who are walking into the inferno of those reactors, doing their incredibly dangerous job, acting great, as Hafiz has said. Hafiz was the great Iranian (Persian) poet and mystic. The Panhala website marries poems with images and the results are many times very beautiful and meaningful.
I wish the people of Japan peace and good health.
Posted by Bobby Byrd at 3:45 PM No comments: 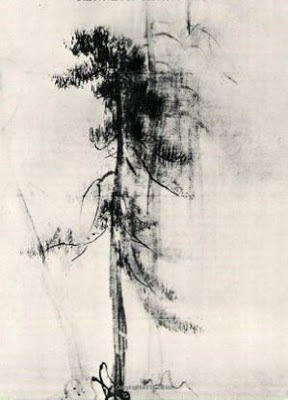 The following five poems from Japan were translated by Kenneth Rexroth (see his beautiful book 100 Poems from the Japanese). I receive the Village Zendo Newsletter. A person who I assume is Nina K posted them this morning, having received them from another list operated by Larry Robinson of California, "who sends out poems almost daily." The poems found a place in my heart today, so I thought to share them. I wish you are all well. Peace and hope for the people of Japan. For us all.


I can no longer tell dream from reality.
Into what world shall I awake
from this bewildering dream?


The crying plovers
On darkening Narumi
Beach, grow closer, wing
To wing, as the moon declines
Behind the rising tide.


I loathe the seas of being
And not being
And long for the mountain
Of bliss untouched by
The changing tides.


If only the world
Would remain this way,
Some fishermen
Drawing a little rowboat
Up the riverbank.

— Minamoto No Sanetomo
Posted by Bobby Byrd at 4:42 PM 1 comment: